As Mary and I settle in on the plane from JFK we can’t wait to meet up with our PTPI friends and make new ones. We are headed to our sixth European Conference, this one in Roman, Romania, a major highlight of the year. With the help of Verena from the Berlin office, and Andrei, the mentor of the Roman Student Chapter and organizer of the post-conference trip, we have made all the arrangements, including a 2-day pre-conference visit to Bucharest. Gina, who lives in Bucharest, was also helpful in our deciding what we would see and where to eat while there.

We enjoyed these two days in the Capital city checking out museums, city highlights, the ‘old city’, and savoring the local cuisine. As we were in an outdoor museum searching for a place to quench our thirst we heard our names being called. Amazingly, our dear friend Janusz from Poland was enjoying lunch with four students from the Katowice Student Chapter. We joined them and the PTPI bonding was underway. Even before the conference began we had caught up with an old friend and made four new ones.

We made our way the following day back to the airport to catch the bus to Roman. Although the bus ride was about five hours we shared the ride with PTPI members from Switzerland, Germany, Bulgaria, Sweden, Togo, and the USA – a typical PTPI international group.

Upon arrival in Roman we were welcomed by many students, with Daria and Malina tying woven ribbons with the Romanian flag colors on our wrists, and Ana Maria, Miruna and Andrei checking us in. Being quite hungry we then went to an informal dinner with good PTPI friends we have made over the years, like Ernst, Rolf, Hans-Dieter, Hannelore, Anita, Karin, Ilona, Janusz, Angel, Chalks, and Erin.

The conference itself was wonderful, as we have come to expect. It began with an Intercultural experience of Romanian art traditions and dance at Miclauseni Garden. This is the first time that all the conference attendees got together and there was a lot of mingling, greeting, and meeting PTPI members. It could be seen from this first event that there was a very good mix of students and adults, which Mary and I really enjoy, because you can get different perspectives on many topics and cultures both international and generational. We learned how to paint eggs, create objects out of red and white threads, and try some traditional Romanian dance. We also decorated shopping bags to hold gifts that were given to children in an afternoon event.

At each conference there is a humanitarian activity planned. In Roman this involved a visit to the “Love and Hope” Day Care Centre for disadvantaged children. We played with the children in the park – games, balloons, dancing, face painting, and handing out gift bags. Katerina, one of the students from the Provadia Student Chapter, even performed some incredible acrobatics. The Roman Chapter students do a wonderful job helping out with the children several times a week.

The first day ended with a nice dinner at a local restaurant, Casa Veche, where you could sneak out between courses and ease into the dancing that would occur on upcoming evenings.

We woke up the next day to begin our Roman City Treasure Hunt. We were divided into teams and each team was assigned a couple of students to assist and document the results of the hunt. It was a fun event as each team looked for things or acted out a list of items for bonus points – like finding angels on the ceiling of the Library, posing like the picture on the cover of Abbey Road, proposing marriage to a local resident, reciting a poem in the park, and making people you don’t know laugh. Points were given to each team based on their hunting and acting skills. We then met at the Roman Voda National College to tally scores for prizes for the top 3 groups.

The afternoon was taken up with the World Café.́ This was orchestrated by Verena, with volunteers assigned to each table, and attendees at each table discussing an issue or opportunity relevant to PTPI. Attendees rotated through several tables during the allotted time providing their ideas on each topic while enjoying coffee, snacks, and making new friends. The volunteers documented results from their tables, and then Verena consolidated them into a Conference summary.

The day wrapped up with a tasty buffet dinner and dancing to the sounds provided by the DJ. Dancing is always a part of these conferences, and what better way to celebrate with friends both old and new than on the dance floor. Of course students from the Roman Chapter and the visiting Student Chapters have the energy to keep up with the music, but many of the adults try valiantly to keep up with them. Ralitsa even taught us how to swing our hair to the beat of the music (at least Mary has enough hair to swing). It was also great fun to teach Billy from the People’s Republic of China some dance moves. No trouble sleeping that night!

Day three was the day that business was discussed. The European Council Meeting was held in the morning, led by Chalks and the European Board of Directors. Angel spoke about his activities for PTPI and the youth chapters. All the good work being done by the chapters in the past year were discussed, with in-person presentations by the Provadia, Varna, Katowice, and Skopje Chapters. (We witnessed some of the good work being done by the Roman Chapter on the first day.) Toni also presented the humanitarian work she has been doing in Nepal.

Two workshops, one on youth engagement and the other on member engagement, took up most of the afternoon. These workshops expanded on ideas and options from the prior day with a search for solutions.

Following the business of the day, all were invited to go to the park to follow pre-defined scripts on their cell phones. It was a lot of fun, as this large group of PTPI people were doing some crazy and funny things in a synchronized fashion. Imagine what the local Romans were thinking of this activity as they were trying to enjoy a fine afternoon in the park.

The final event of the conference was the Gala Dinner at Hanu Ancutei, a traditional inn outside Roman. What a wonderful evening that was. We had a superb Romanian dinner at our table with a great friend Christiane from Hamburg, met Daniela and Liliana from the Vaslui Chapter, and many others. While dining, all tables were serenaded by local musicians to add to the festivities. Of course there was dancing, both contemporary and traditional enjoyed by all. One of the evening’s highlights was a ‘picture stage’ where groups of PTPI’ers posed with various props. We took home more than a dozen pictures of old and new friends from the conference. And finally there was the singing of favorite songs and national anthems from such a diverse set of people. (Mike felt sorry for Laura and her ears having to sit next to him while singing on the bus back from the gala.)

On Sunday, as some packed up to return home, there was an optional excursion to Neamt County to visit the Agapia Monastery, Neamt Fortress, and the city of Piatra Neamt. We chose not to take this trip since we were leaving the next day on the post-conference trip through Romania with about 15 others that was led by Andrei, Daria, and Teodor – another terrific trip that we’ll write-up another time.

Since we remained in Roman on Sunday we met up with two students, Maria and Vladimir, and spent the afternoon snacking, and talking about life in Romania and the USA. This part of our PTPI travels is the most rewarding when we get to talk individually with PTPI members like Maria and Vlad; or we have a discussion with some Polish and Romanian students (Julia, Gosia, Agnieszka, Ania, Madalina and Teodor) and Ernst from Switzerland about their aspirations and world views; or we have members from the Host Chapter proudly show us their city (or country) and its traditions; or we do treasure hunts with Mariya and Angel; or we form an impromptu Blue Man Crew like at the gala (with Kennedy and Stefan ); or we “dance off both our shoes” with people from all over the world. We have met hundreds of people at these conferences, made many friends, and have maintained a connection via email, or social media, or at home stays, or at follow-on conferences, with many of them and cherish these relationships.

We have learned over these years that people are people regardless of their home countries, backgrounds, dress, traditions, languages, and age and truly want to live in peace with dignity and love!

Mulţumesc – Roman Student Chapter, for showing us this true spirit! 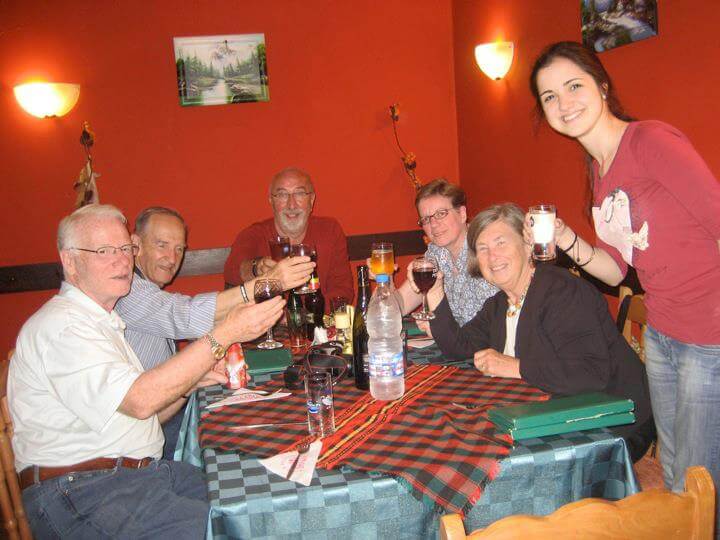