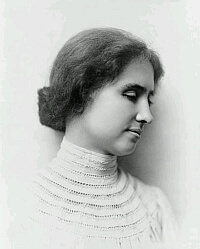 The curtain went up. The stage was set up like a reception room in a house. A young man who sat beside a piano rose and bowed ceremoniously. He introduced a majestic middle-aged woman to the audience. It was Anne Sullivan Macy. Anne made a brief speech. Everyone listened attentively to her sweet-sounding words. Later another woman, beautifully dressed and pleasant-looking, walked on to stage. Anne clasped her hand. She just looked at the audience and stood revealed.

Later, that woman – Helen Keller – spoke. She struggled hard to let out each word. The audience too struggled to grasp what she said. Still they, kept their ears strained and sharp. A long applause resounded in the hall when Helen stopped speaking. These two were among the most famous people in America those days. Anne Sullivan was a bold educationist and civil rights spokesperson. Helen Adams Keller was her deaf and blind disciple. Despite being handicapped, she had made a name for herself as a writer, women’s liberation activist and a social worker.

The audience was immensely touched by Helen’s speech. Her words could be summed up this way: “My teacher told you how her one word touched the darkness of my mind and how I woke up to the bliss of life. I was dumb; now I can speak. I am obliged to the hands and hearts of others for this achievement. Through their love I came to see my mind; I could see God, I could find happiness. In fact, we all live for helping others and for being helped. By remaining united we can do a lot of things. Only love can break down the walls that stand between us and our happiness. The greatest commandment is to love one another. I would like to thank God at the top of my voice for all the love, happiness and hope that would be coming to me.”

Why did Helen Keller give such a message? Both Helen and her teacher needed money to live. They got ready for this show in the hope of being paid. The audience had come to get a glance of this ‘living miracle’ much more than hearing a lecture. Most of them were curious as if they were viewing a rare creation. But Helen Keller’s glory lies in the fact that she suffered all such humiliations and fought bravely for the rights of the physically handicapped people. She declared that the physically handicapped people had the right to live like the normal people.

Helen demanded humanitarian consideration and equality for them. Even today, the life of Helen who successfully conquered obstacles in life is indeed a source of inspiration and zeal for millions of people.

The eventful life of Helen Keller has ever been an inspiration for the physically disabled and for those who suffer discrimination of any kind. She advocated and struggled for their rights till the end of her life.
Source article>

Engage with People to People International and our members around the world.
Copyright © 2020 PTPI.eu | All Rights Reserved | Privacy
We use cookies to ensure that we give you the best experience on our website. If you continue to use this site we will assume that you are happy with it.OK